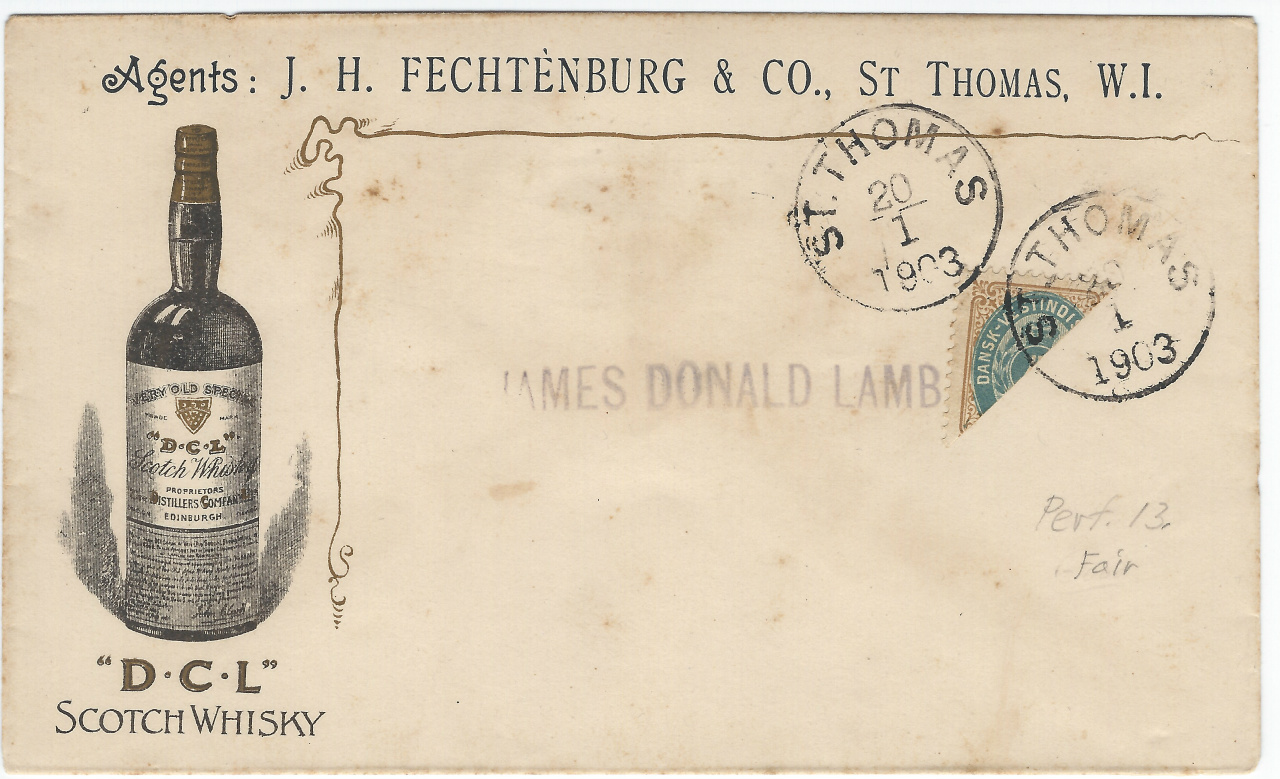 First day card from St. Thomas - inverted frame Printing 3 pos 51.
Double cancels are very unusual.
The inverted frame was first identified in 1917, so its use on philatelic mail was not deliberate.
The card is philatelic.

The bisects were used from January 20 to June 4 1903. The great majority of thousands of covers mailed are readily identifiable as philatelic -but normal commercial covers were also saved though they are sometimes hard to identify.

For reasons explained further below - the bisects were not authorized on the same day on all islands nor were the final day of use coordinated.

Notice from The Bulletin - with which is incorporated Saint Thomas Commercial and Shipping Gazette January 20 - 1903.

January 20 1903 it was announced in "The Bulletin - with which is incorporated the Saint Thomas Commercial and shipping Gazette" - that the Post Office on St. Thomas would allow the use of bisected 4 cents. It has wrongfully been stated that it was announced in the "St. Thomas Tidende" on that day - but first time it appeared in this newspaper was January 21 1903.

The Post Offices of DWI were in desparate need of 1 cent and 2 cents stamps. 1 cent stamps had not been ordered in a timely manner and the much awaited 2 cents Coat of Arms stamps had been delayed from Denmark.

These events combined were the reason that the short era of bisected 4 cents of DWI came to be and for that we are very grateful today. 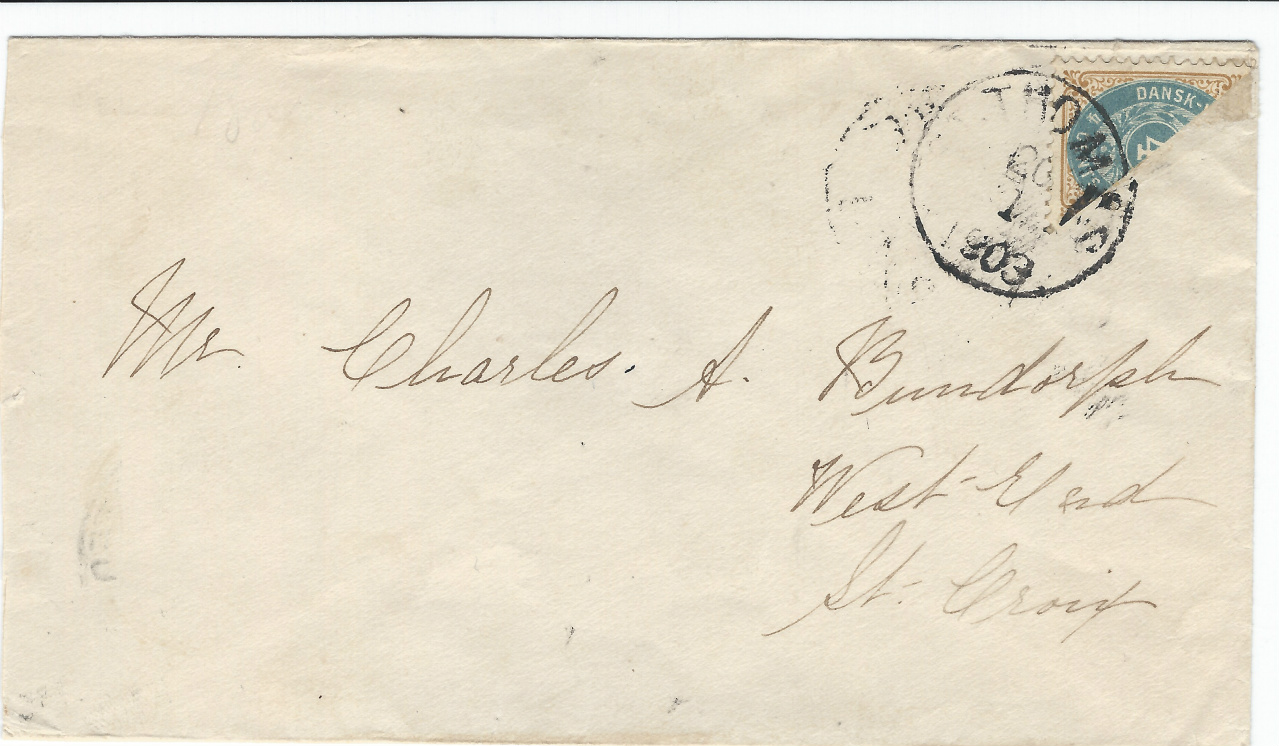 January 20 1903 First Day of use - St.Thomas.
The cover is Philatelic - sealed and without content. This cover was sent the same day Thuesdag evening for an overnight trip to Christiansted Post Office and then directed to Frederiksted the day January 21. This is the only cover recorded canceled January 20 and sent to Christiansted the same day. 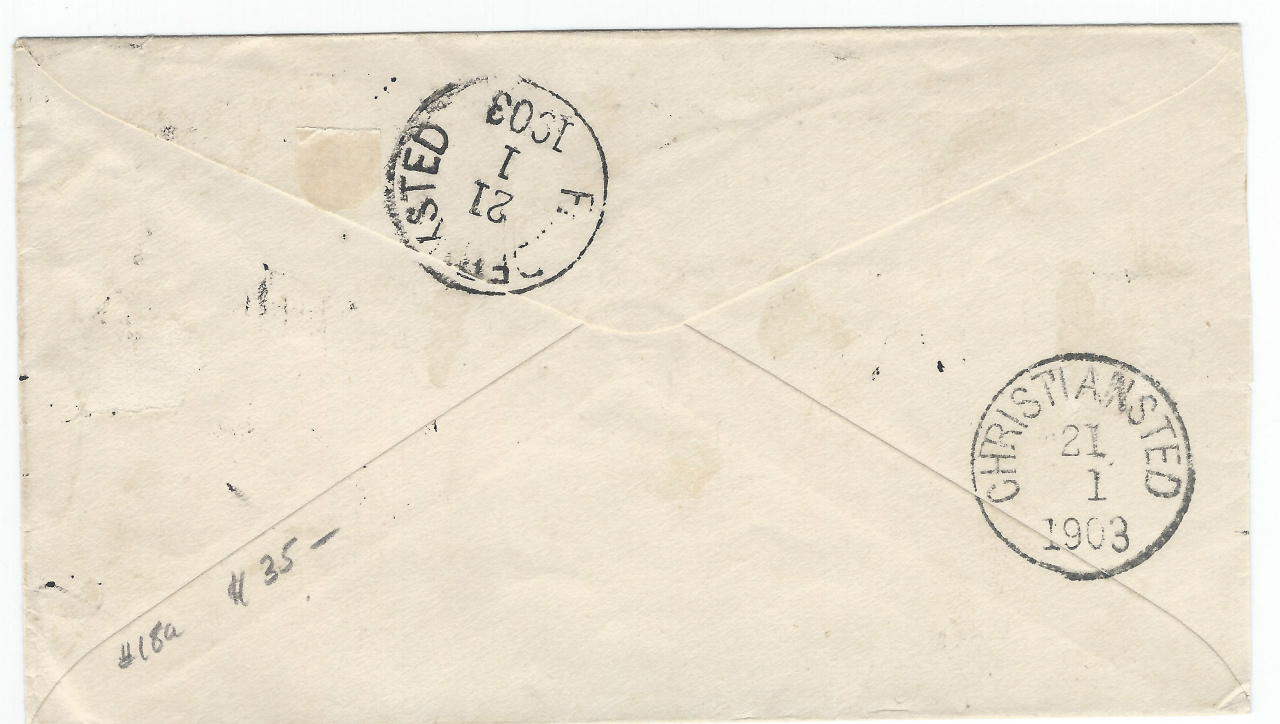 Back cancels are (Wednesday) January 21.
Christiansted and Frederiksted. 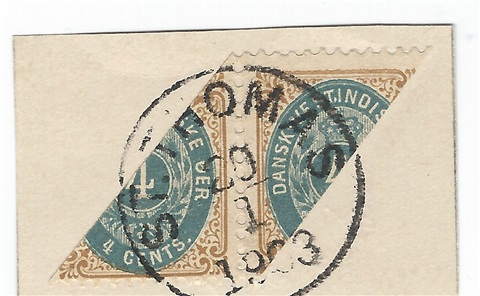 This rare set of bisected stamps on a partial - is from a stamp dealer in St. Thomas. This partial is blatantly philatelic - further emphasized by the fact that the dealer chose to sent unsealed letters to his local customers paying 4 cents whereas the local rate would have been 1 cent.
The bisected stamp to the right shows oval flaw "White dot between T and I. Printing 3 pos. 4. 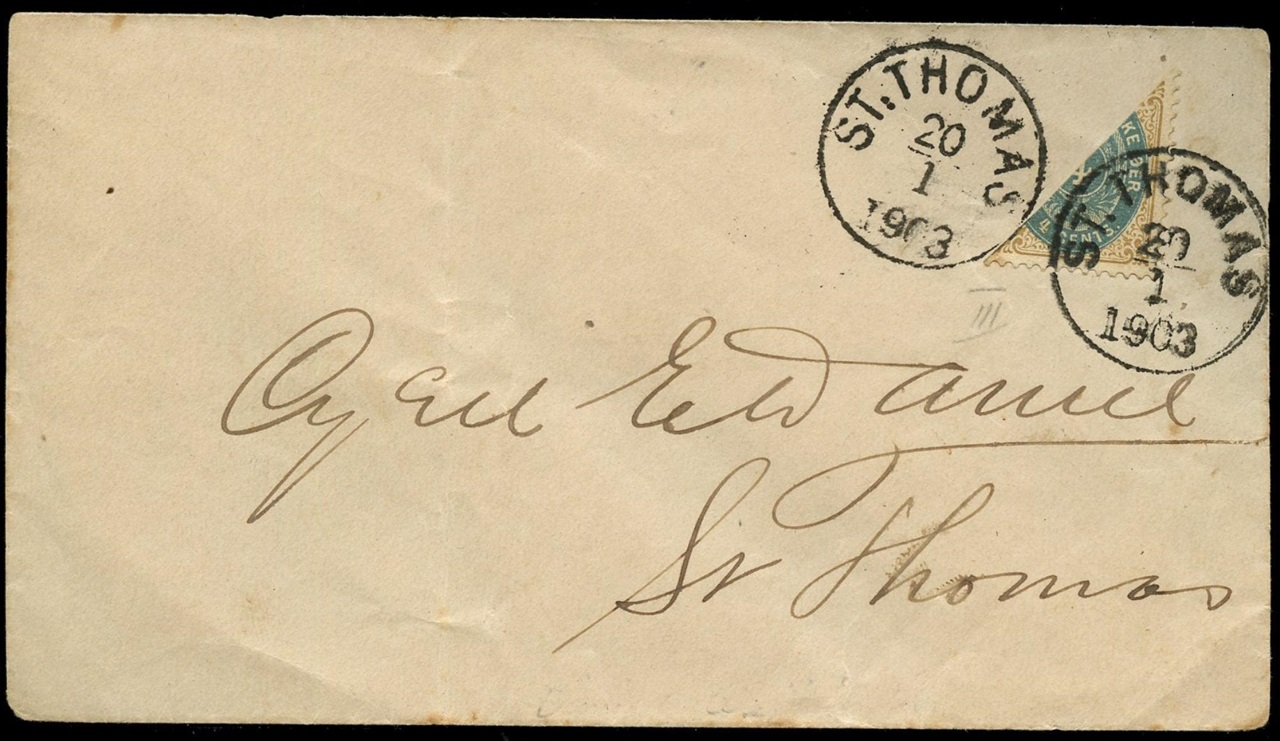 Double cancelled St. Thomas January 20 1903. Local cover - cut open. Double cancels are rare. Maybe it is due to lack of ink - but it looks as if the cover has been struck by the two different St. Thomas cancels - ST. and ST: (?) 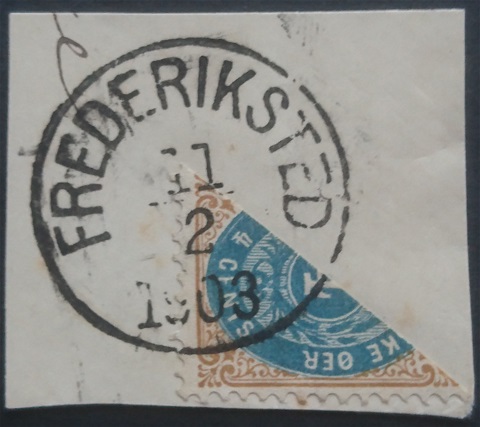 Partial cancelled Frederiksted February 11 1903 - first day of use in Frederiksted. This partial is very rare.

The "St. Croix Avis" - published the notice to the public - that the use of bisected 4 cents was now authorized - on February 11, 14 and 18 1903. This notice was dated February 10 - but it was not announced until the day after on February 11 - which is therefore regarded as the First day of use on St. Croix. 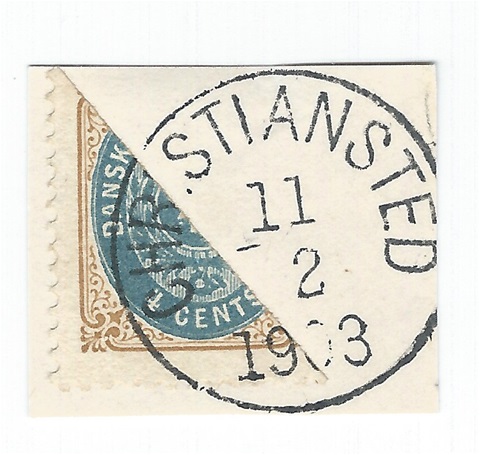 Christiansted - First day of use - February 11 - 1903. Printing 3.
After many years of search this is the one and only bisected from Christiansted with a first day postmark identified. This partial is unique. 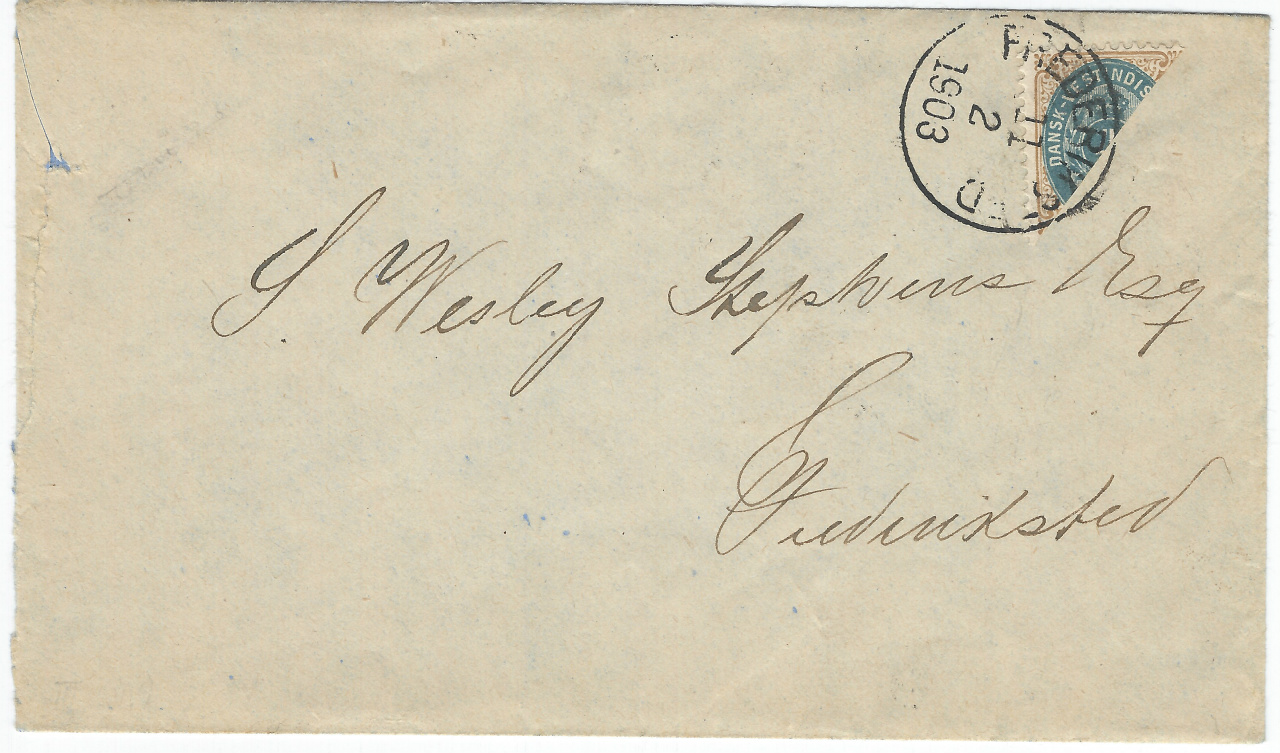 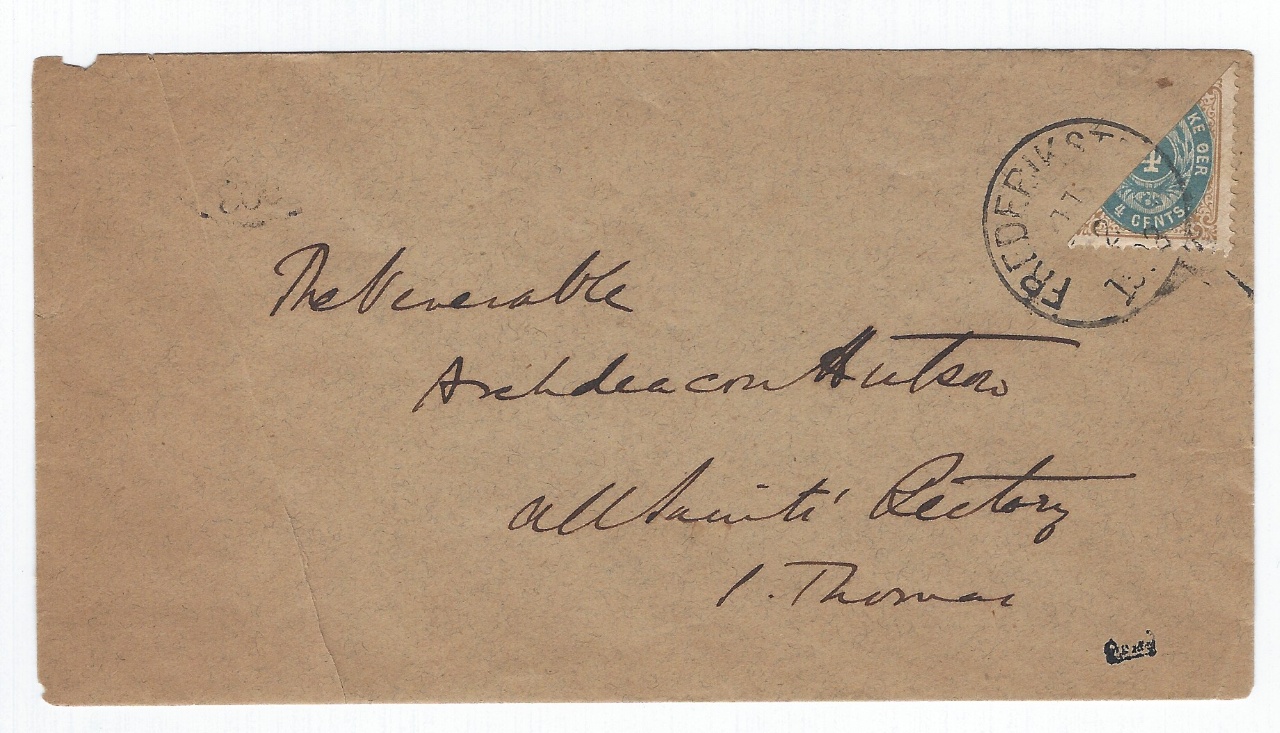 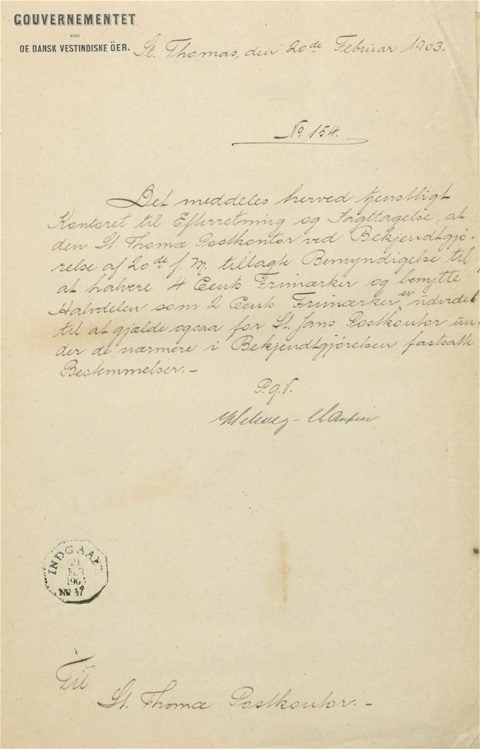 Please note that the notice to the public regarding use of bisects on St. Thomas on January 20 - did NOT include St. Jan as previously assumed. I have recovered a document in the Danish Rigsarkivet showing that February 20 1903 is the authorization day on the use of bisected 4 cents on St. Jan. See the letter from Gouvernementet to the St. Thomas Post Office dated February 20 1903.

As we only know of one cover sent from St. Jan - it is not clear why Gourvenementet decided to specify an authorization day of bisected use on St. Jan - February 20 1903?

FINAL DAYS OF USE 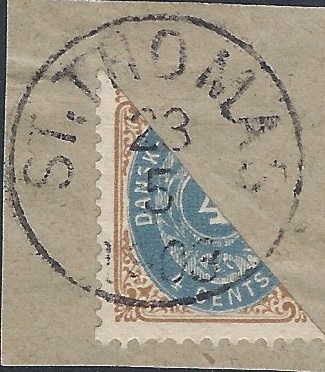 The Bisected stamps were in use for 135 days. A new supply of 1 cent stamps was received in March - but the DWI Post Office were allowing the use of bisected stamps further three months.

This gives rise to an interesting question:

Why was the permission to use the bisected 4 cents on St. Croix extended till June?

- Maybe the authorities in DWI did not know that there were still enough 1 cents stamps in Copenhagen(?)

- Maybe they wanted to put pressure on Copenhagen to get the new 2 cents Coat of Arms stamps(?)

An article by Victor Engstrom shows that St.Thomas received its new 2-cents stamp on May 23, Christiansted June 5 and Frederiksted June 8. These dates correlate more or less with the dates the bisected stamps were discontinued. Copenhagen likely would have telegraphed the two postmasters on St. Croix as to when and how the 2 cents were shipped and they would have known the arrival dates of the ship.

The final number of covers mailed will never be known. As previously mentioned estimates have been as low as 2500 and as high as 56.800. The monthly volume of mail having two cents postage was probaly close to 1000, so normal use during this time period of 4 months should have been approximately 4.000.  The philatelic demand likely added several tens of thuousands more. 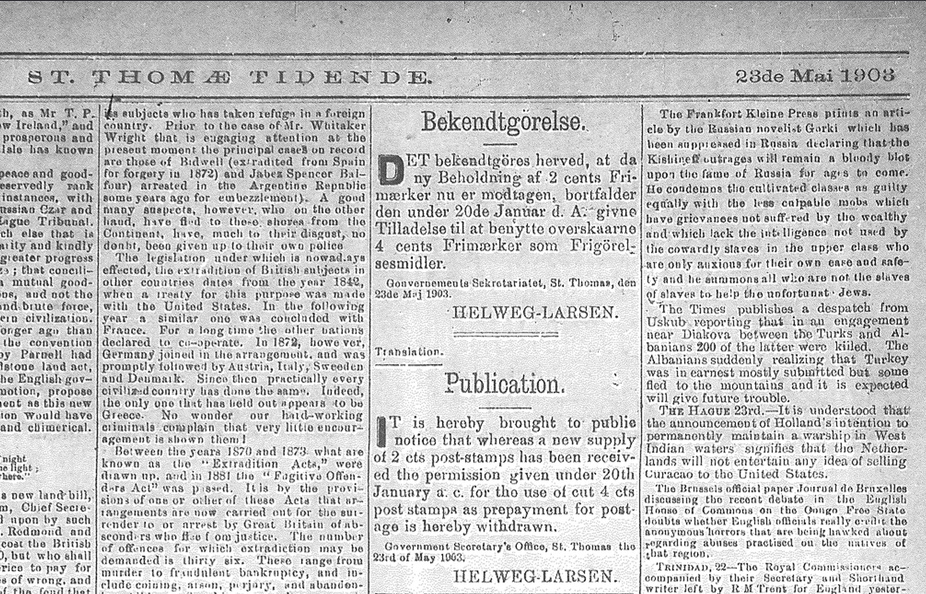 St.Thomas Tidende May 23 1903 - announces the withdrawal of the bisected 4 cents. Note - the notice is in both English and Danish. 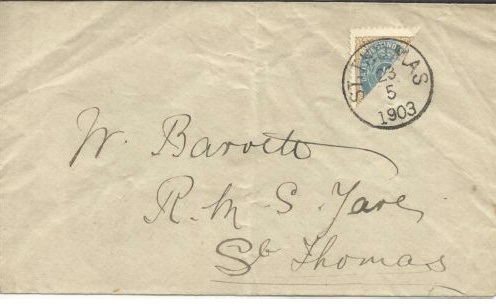 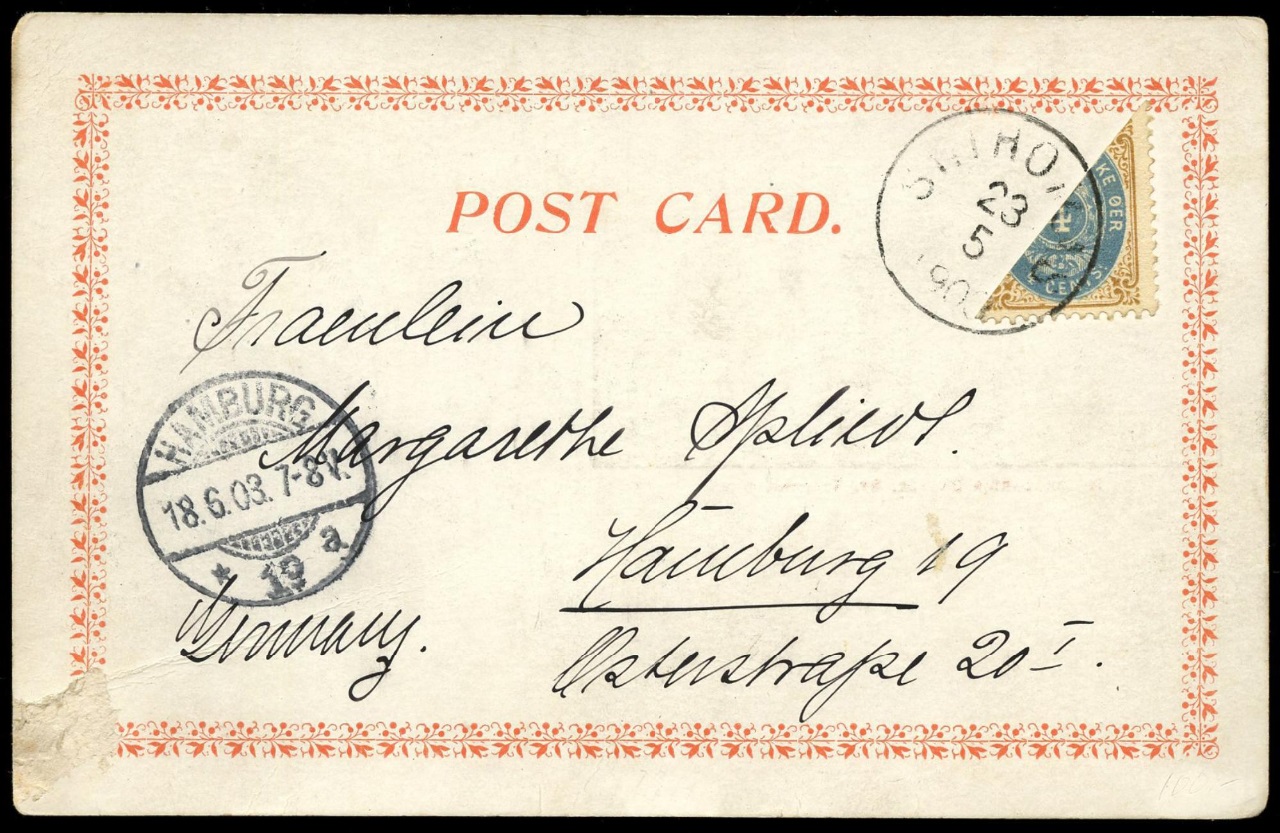 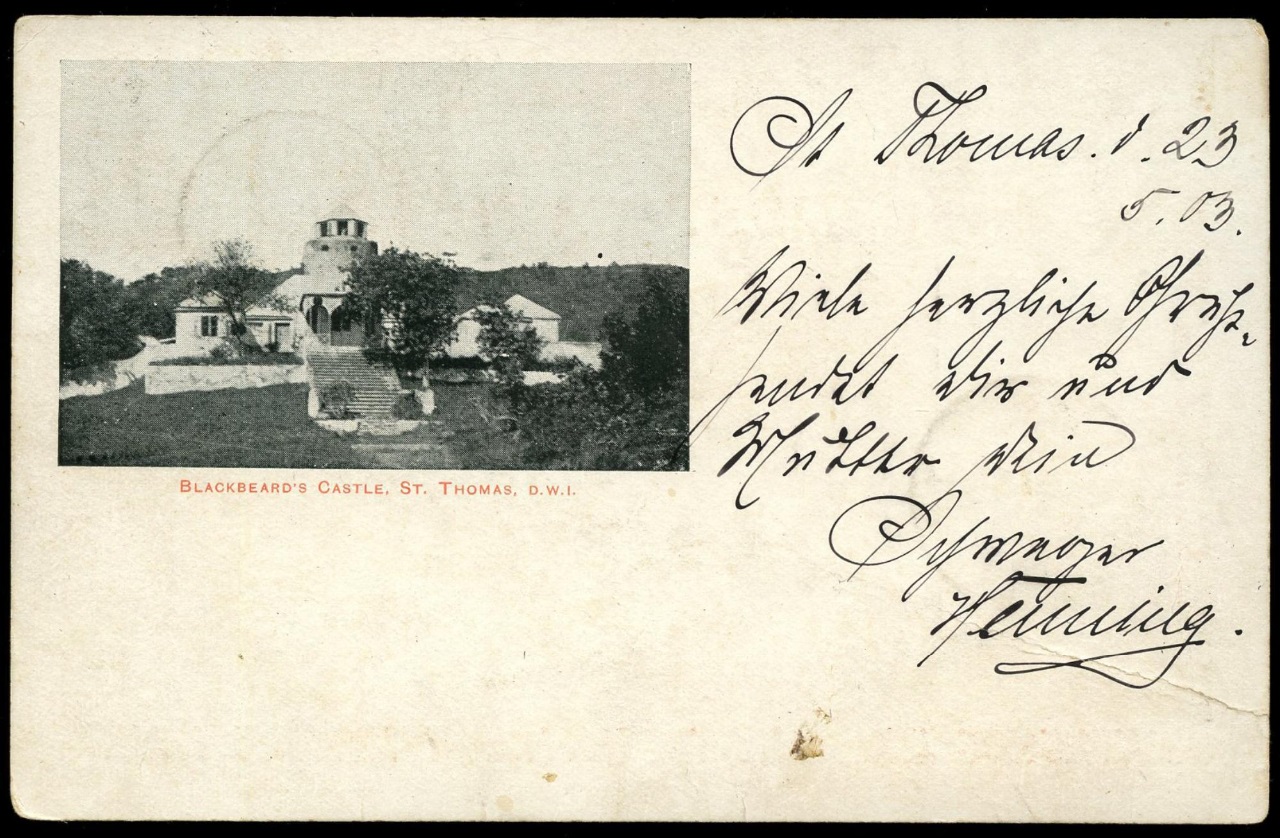 St. Thomas May 23 1903. Backside of the postcard showing genuine usage. 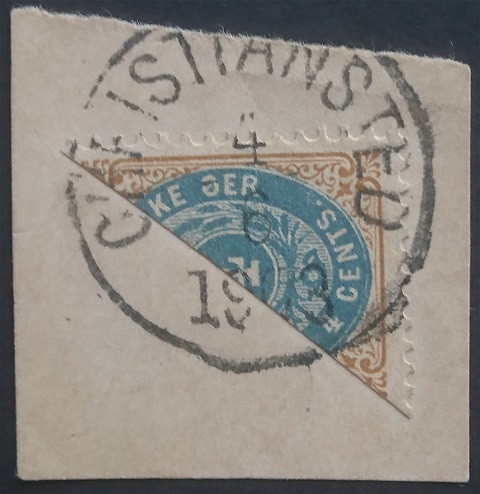 So the public did not know about the final day of use being June 4 until published on June 6. 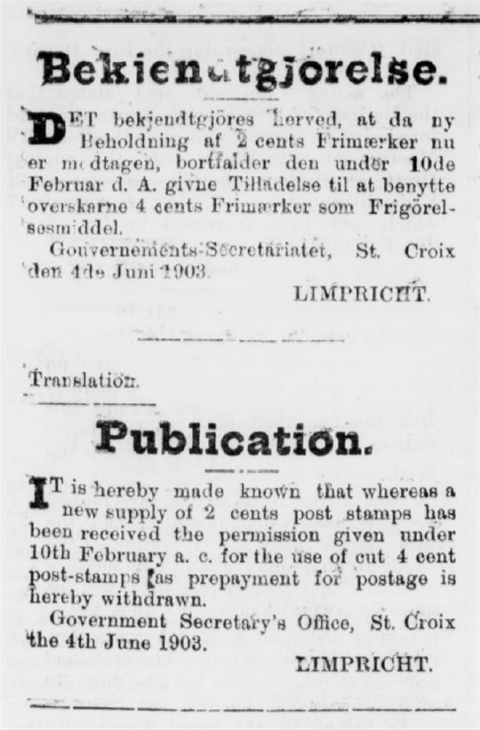 It is hereby made known that whereas a
new supply of 2 cents post stamps has
been received the permission given under
10th February a. c. for the use of cut 4 cent
post-stamps as prepayment for postage is
hereby withdrawn.
Government Secretary's Office, St. Croix
the 4th June 1903.
LIMPRICHT. 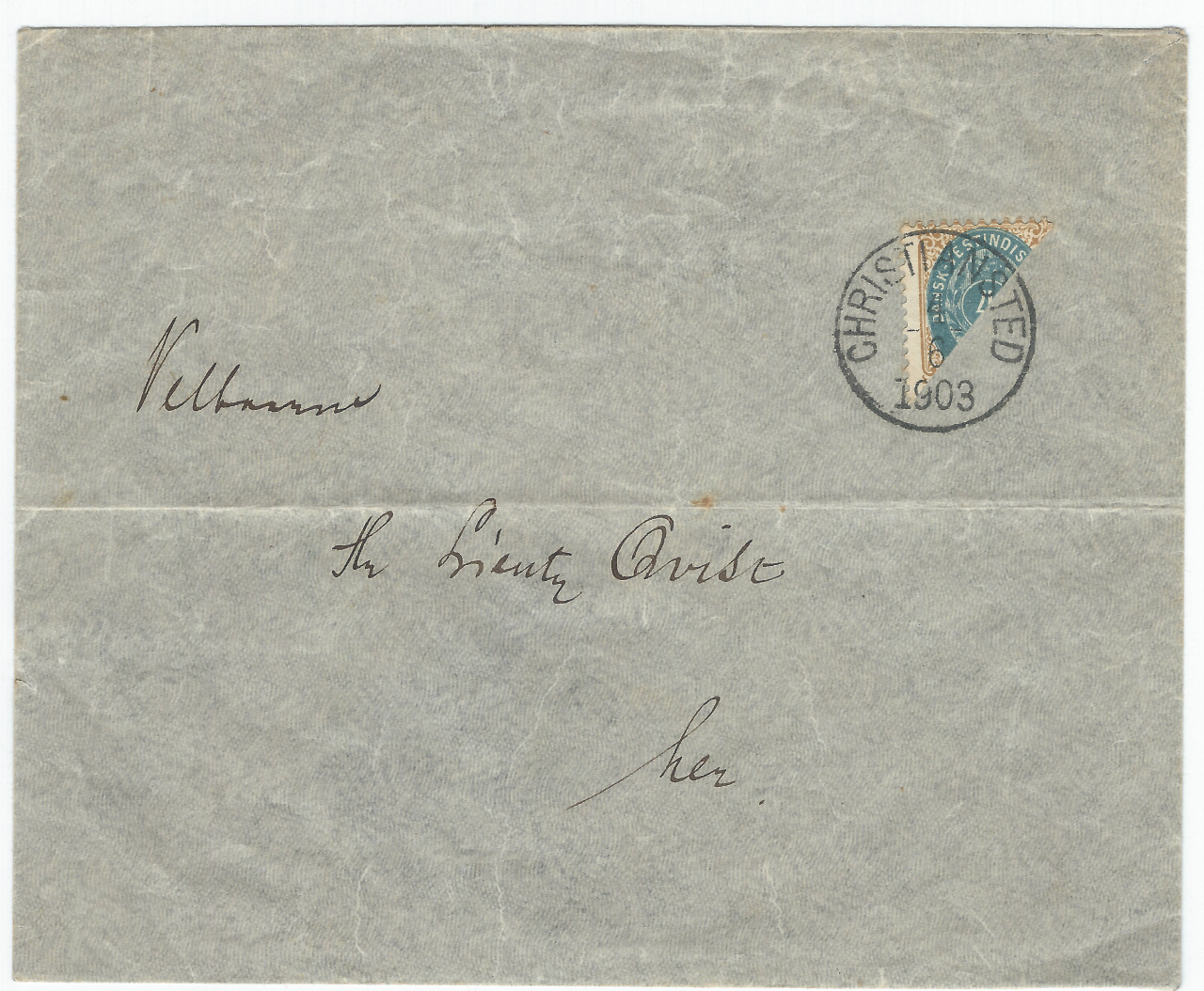 This cover and the cover shown below are the only two recorded covers cancelled on the last day of use of bisects on St. Croix.
This cover was mailed by Privat no. 12 - who in place of the town name wrote “her” which is Danish for “Here” indicating very local delivery. 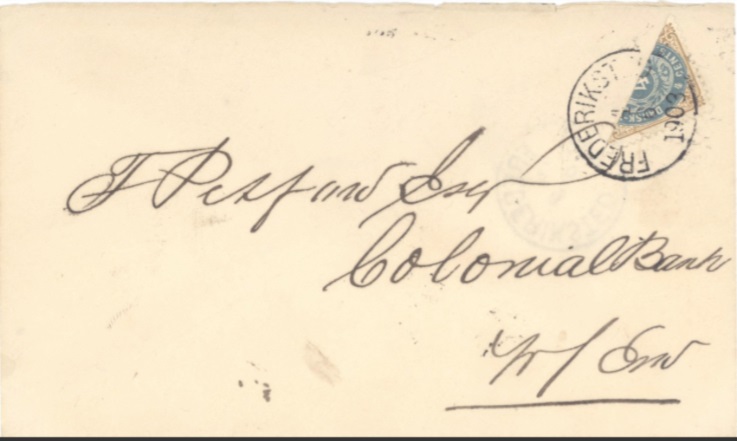 Frederiksted June 4 1903 - the final day of use in Frederiksted. This cover is unique.

One of the first of the so-called "Ocean stage coaches" built in the 1840's to carry mail between the British colonies. R.M.S. Yare actually served a variety of purposes. First and foremost she was - as her name implied - a carrier for the Royal Mail. In order to provide the most reliable service possible among the scattered islands of the West Indies - the Yare and her 14 sister ships were equipped with steam-powered paddle wheels as well as a complete sailing rig.The Royal Navy was concerned about hostile nations in the Caribbean so they insisted the steamers carried a variety of small arms - including muskets, pistols and pikes. Furthermore - their decks were specially reinforced to enable them to carry heavy cannon in the event of a war. The Yare never participated in any events of war.