This is the story of the last known usage ever of a bisected 4 cents - receiving a pen cancellation by the purser on board the HAPAG steamer SS POLARIA on SEPTEMBER 23 1903 on route from St. Thomas to Europe (Le Havre - France). 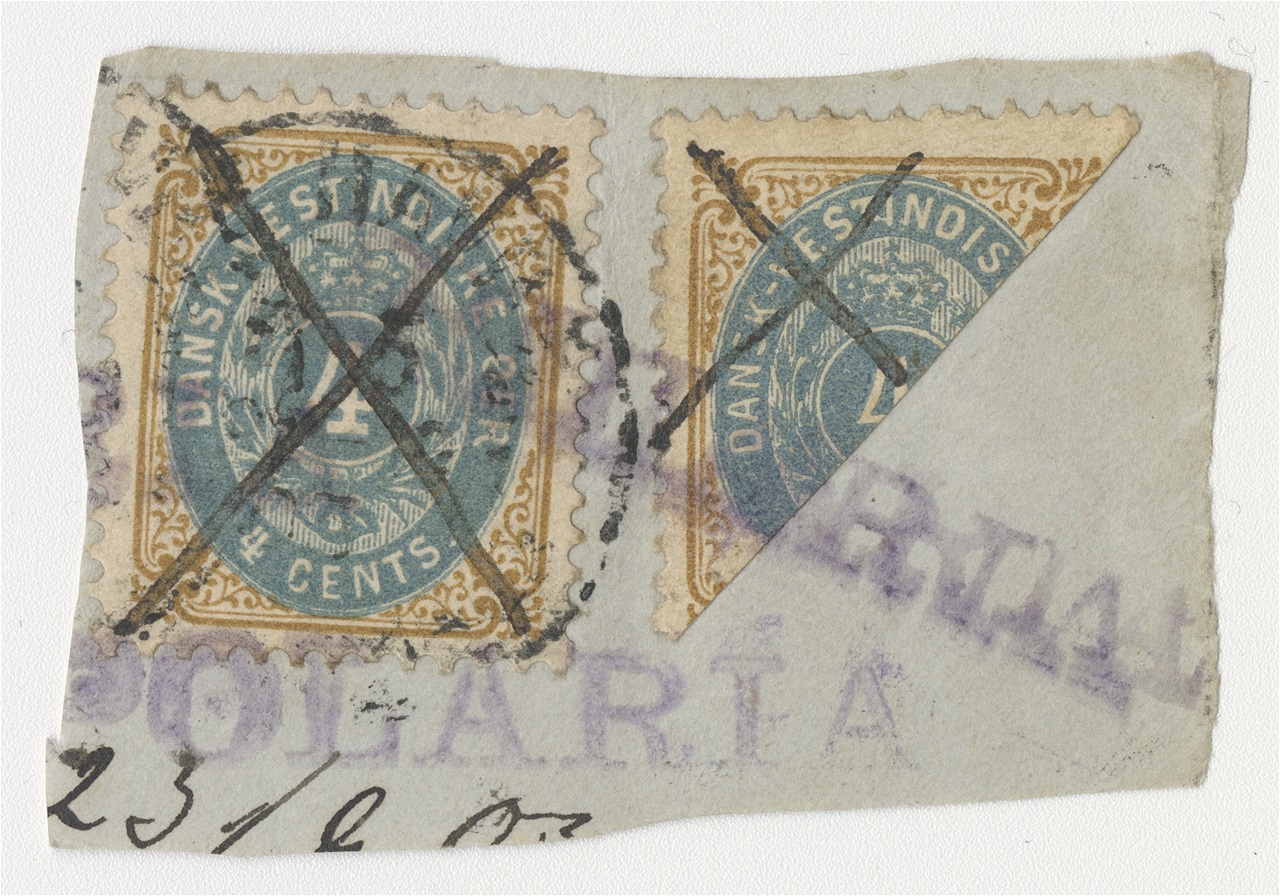 Bisected 4 cents on a partial - pen cancelled on board the German steamer SS Polaria on Sep 23 1903.

For long this partial had been thought pen cancelled by the purser on SS Polaria on May 23 1903. This coincided with the presence of SS Polaria in St. Thomas harbour May 1903. The postmark - being difficult to read was receiving no more attention. The partial was exiting due to the fact it was pen cancelled on a HAPAG steamer - the bisected stamp showing the oval flaw "White dot between T and I" and the purser cancellation being May 23 1903 - the last day of authorized usage of bisects in St. Thomas. So far so good - a very unique partial indeed.

I kept thinking there was something not quite right with this telling and the following events and details described - clarify how I came to be convinced that:

Looking into the activities of the HAPAG ship SS Polaria in 1903 was very interesting. First I wanted to know how many times it travelled to DWI in 1903? It left Hamburg via Antwerpen in April 1903 heading for St. Thomas and later Progreso and Tampico in Mexico. Checking all DWI newspapers published in April and May revealed that SS Polaria did arrive in St. Thomas May 5 1903. From there it sailed for Mexico. It would therefore be very unlikely that the purser had waited 17-18 days cancelling the letter. So I wanted to know when SS Polaria would have returned to DWI on its way home to Europe. To my surprize no records in any of the DWI newspapers showed arrival of SS Polaria in St. Thomas from Mexico in May or June. This was strange cause which route would it then had travelled if not via St. Thomas? Additionally - records showed that the SS Polaria was sold to a British company in July 1903 and later back to a German company also in 1903. No company names specified.

I needed to know its where abouts having left Mexico? By coincidence I came accross a document "Public Health Reports - United States (Reports from national quarantine) - measures of inspection and disinfection of vessels to and from certain ports of Mexico" and it became evident that there was great efforts taken to inspect and disinfect vessels travelling from Ports of Mexico to US destinations. In this document on page 1138 (this part dated July 15 1903) the SS Polaria was mentioned twice and the table stated the port of departure being Tampico Mexico and date of arrival at the port of New Orleans - Louisiana US - June 10 1903. Aparently it had been inspected June 20 1903. Obviously the SS Polaria had been under some sort of quarantine or at least been inspected and therefore did not go to St. Thomas in May on its way back to Europe (maybe it was never even the plan to go back via St. Thomas(?)). As a consequence - the date of the purser mark on the partial could not have been made leaving St. Thomas for Europe on May 23 as previously concluded.

I further investigated the DWI newspapers and found that the SS Polaria went on another trip to the Caribbean departing Hamburg - arriving in St. Thomas August 16 - and departing on August 17 for Columbia. The SS Polaria then arrived in St. Thomas again Sep 22 homeward bound for Europa. SS Polaria left St. Thomas on Sep 23 1903 - which is a perfect match with the purser cancellation date on the partial. I was now fully convinced.

The purser on board SS Polaria pen cancelled the stamps on the cover including the bisected as he had no choice - but to do so following the regulations. Upon arrival in France - the bisected stamp was not cancelled LE HAVRE as was the other stamps. Which other stamps were present on this cover we will never know - nor will we ever know whether it was a deliberate overpayment by 2 cents. If it was not overpaid and the Post Office in Le Havre rightfully did not accept the bisected stamp - a postage due penalty was likely applied..

BELOW YOU CAN SEE HOW I INVESTIGATED THE INFO ON THE PARTIAL TO DETERMINE THE DATE OF DEPARTURE FROM ST. THOMAS AND THE PORT OF ARRIVAL: 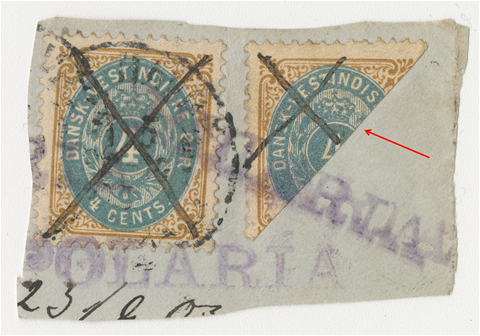 The bisected stamp never received the LE HAVRE cancel. This partial originates from a cover and not a post card. 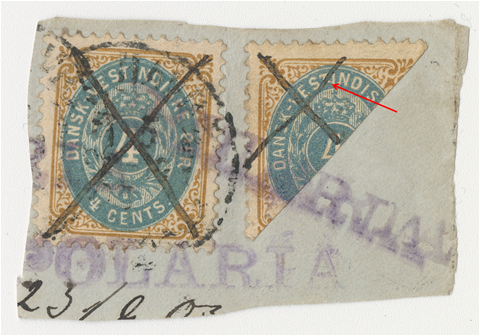 A possible motive for the sender could have been philatelic. The cover could very well have been overpaid. We will never know.

If philatelic motivated - the sender could very likely have added extra interest to the cover by choosing a bisected 4 cents with an oval flaw which is the case here. The bisect being a Printing 3 pos. 4 "White spot between T and I" flaw.

The destination is not known and neither is the total postage. Most likely it is either 8 cents or 16 cents depending on the weight of course. The cover could have been receiving a Postage Due penalty. 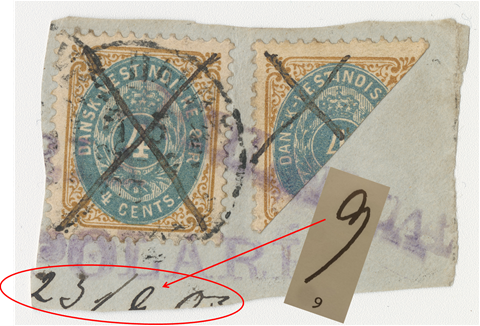 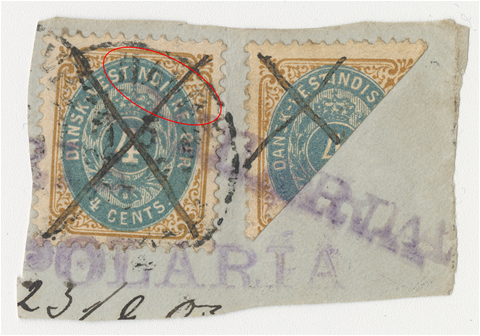 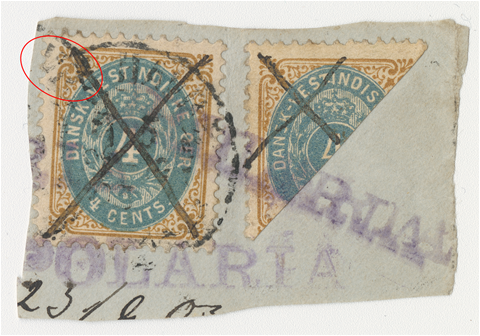 There are two cancels and on the left cancel - VR from HAVRE is visible. 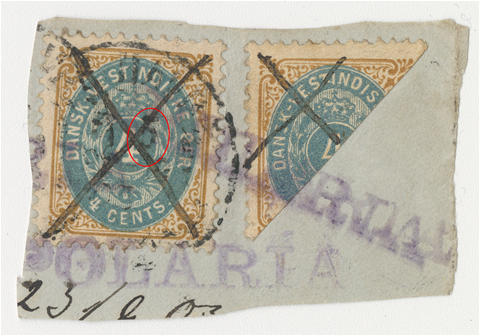 This is not a date - but the numeral 5 assumingly being part of the time af cancelling. This is also seen on other LE HAVRE cancels from 1903 - but there are various examples of cancels from the period. Sometimes it shows a * 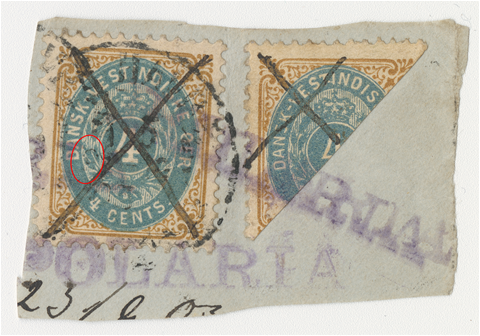 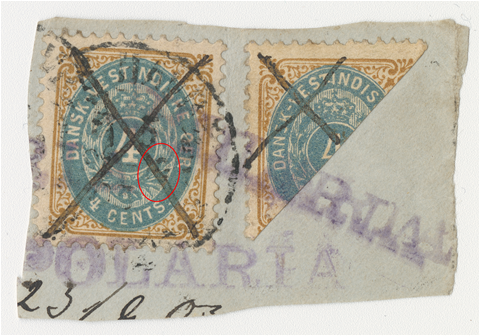 This is to me the most important part of the LE HAVRE cancel - showing the month.There is clearly a rounded upper part. The right side of the number - shows vaguely the outer parts of the line of the numeral - but lacking ink filling out the line. The line goes downward - ruling out being a 6, 8 or 9. The latter two would have have had an inward curve around the middle section which is not seen. Very vaguely you can see the bottom rounding of the 0 crossing the ink line of the purser cross cancel. To the left of the 0 - vertical ink spots are vaguely present indicating a second but thin numeral - which fits the theory of being 1 - to form 10. 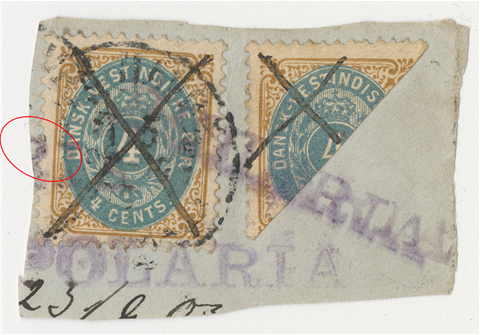 There are two cancels and on the left there is a clearly visible 0. 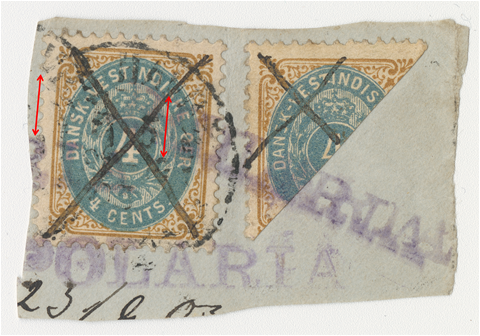 The two red arrows are identical in size for comparison. The distance from the bottom part of the V in HAVRE and to the number depicting the month are identical comparing the two cancels. On the left cancel - it is very obvious that the shape of the numeral is round - being a 0. The same rounded shape of the upper half of the number on the right cancel is clearly seen. 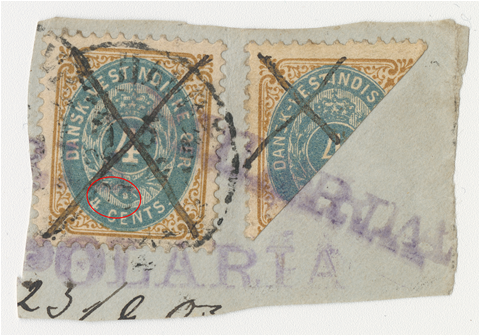 This number indicates the year of arrival and it is easy to recognize the 0. The 3 is also obvious when comparing the flat upper line in 3 with other LE HAVRE cancels. 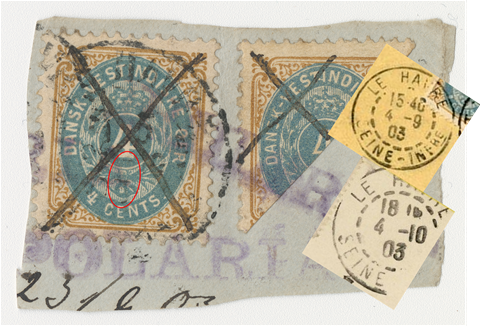 The hyphen between the day and month numbers is placed directly above the 3 - which shows that the number indicating the month to the right consists of two cifres. If it had been only one cifre the hyphen would likely have been located more to the right (see exaples on the two inserted photos of LE HAVRE cancels. I have seen variation in the placement of the hyphen so this is merely an indication rather than a solid fact. 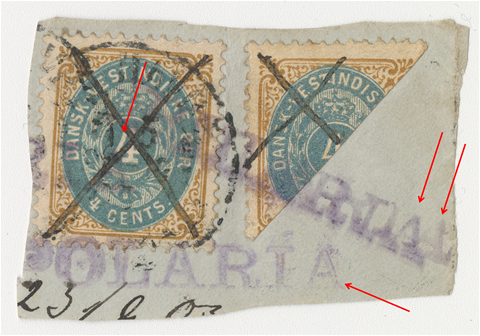 Very unusual for a purser cancellation - this letter has been struck at least 4 times with the purple purser mark POLARIA. 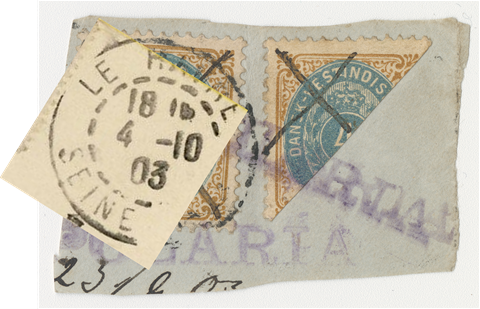 Predicted placement of the right cancel LE HAVRE  (note that the inserted photo of the cancel is from another cover). 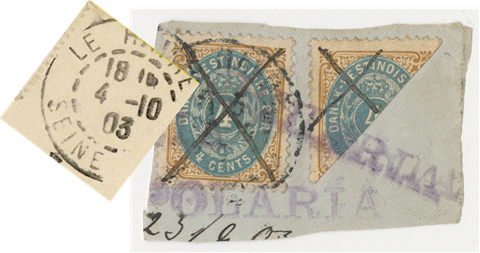 Predicted placement of the left cancel LE HAVRE (note that the inserted photo of the cancel is from another cover).